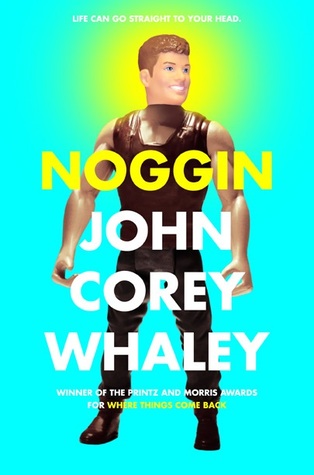 I need to be up front about something. I loved Where Things Come Back. I know it wasn’t a favorite ’round these parts, but I was impressed with the nuance and ambition in its debut author’s writing. John Corey Whaley’s Printz-winning novel made me think and feel and had me excited to read more from him.

The high-concept plot (cryogenically frozen heads!) and the teenage angst (he’s back from the dead wants his girlfriend back too!), oh, how they intrigued and beguiled me. And oh, how I kept waiting for Noggin to deliver on the promise of its authorship.

I’ve been trying to separate my reading of this book from my expectations, because comparison to previous work is not part of the Printz criteria and this book is so different in theme, tone, and scope it would be comparing apples to oranges. It’s a hard task though, because the books share a similar strength.

John Corey Whaley excels at capturing the teenage male voice. This was true in Where Things Come Back and it’s true in Noggin. Travis Coates, as the first-person narrator, offers wry commentary on the strangeness of his situation. (In a smart move, Whaley grounds the high-concept in a scientific reality close to our own, where head freezing is a new and risky procedure. This pays emotional dividends as well when Travis must deal with the fact that he’s an oddity.) He’s also prone to the grandiose statements teens can make, especially when he talks about his girlfriend, Cate.

I had to find her and tell her, show her, that Travis Coates might be mostly ash … but that the part of him that found its way back would always be incomplete without her. I wasn’t dead anymore, so we could be together. It was so simple and I just needed to tell her. So I’d either make it happen, or I’d die again trying. (p. 131)

It’s a consistent and authentic rendering of how a sixteen-year-old boy thinks and talks. I’m not, nor was I ever, an expert on the teen male voice, but people I respect–my fellow Hudson Valley Library Association Book Club members–noted Whaley’s skillful work with Travis’s narration in this book. Despite this literary strength, Noggin still has problems with character development and theme.

Travis, is the only character in the novel who feels like a real person. The others can be broken down into pat descriptions: the dad who couldn’t let go, the grieving girlfriend who moved on, the closeted best-friend, and it goes on. Travis is the only complex character but at the end of the novel he’s essentially the same guy he was when the book began. Growth isn’t a requirement for every protagonist in every novel, but in a book that downplays plot in favor of character development, a lack of emotional growth is problematic and frustrating.

Noggin also has issues with the execution of themes. Whaley makes literal the anxiety that teens have of feeling left behind as friends grow up, physically and emotionally, at a faster pace. That idea fuels the novel but isn’t deeply explored. Identity formation, rebirth, and family dynamics are other themes that are introduced without thorough development.

While I admire the ambition of this fascinating concept–which I’ve referred to as the saddest time travel ever–and I can certainly imagine interesting discussions happening as a result of reading this book, I don’t think Noggin hits the literary highs needed to make it into the Printz winner’s circle this year. It is, however, on the NBA longlist so perhaps others considering this novel with a critical lens are getting more from it.