This year is just full of books, and so many of them are worth talking about. Sadly, we’re not going to get to everything we hoped to read before Monday’s award announcements, despite valiant efforts.

I’m mourning Leavitt’s Calvin, loaded on my Nook but sadly unread; Seneca Village; Lizard Radio, with a premise so unusual that maybe I will read it even after I ought to be moving on to 2016 publications; and a handful of other books besides. Not to mention all the books reviewed by Joy and/or Sarah, a percentage of which I haven’t read and several of which are clearly among the top 20 or so of the year.

But enough crying over books unread, and on to the final titles we have squeezed in. We’ll run half of them today and the other half tomorrow, because otherwise this post would be out of control.

The SLJ review comped this to Ellen Hopkins, and that’s pretty much spot on. The poetry is fine, and totally in keeping with novels in verse; it’s not brilliant, but it’s better than actual teens would have written while not being so good that you can’t believe in the teen narrators. The idea is that it’s Forgotten Girl’s notebook (is it terrible that I can’t remember if either of them had actual names? I only read this three days ago…) recording first love and the descent of the initially promising relationship into abuse. It’s an imperfect conceit; there are poems that allude to poems that aren’t in the text, so that the reader remembers that this isn’t actually the marble notebook at all.

The appeal here is undeniable; likeable protagonists in terrible situations that are 100% realistic and, sadly, probably relevant to many teen readers is a recipe for success. It’s a strong application of the formula, but I don’t see this as the most laudable of the year’s books as a novel, much less as poetry. (It should have been nominated for Best Fiction and Quick Picks, though, and I’m sorry I didn’t read it in time to field nominate.) –KS

Every year (well, for the past two years, anyway) the Writing Consultant at my school offers an essay writing class that she calls Critical Conversations. For their research essay, students are allowed to pick their seed text, and so far, they’ve unanimously chosen the Steven Pinker essay, “The Moral Instinct,” and then write their own essays about large matters of faith and ethics. All of which is to say, teens do love to talk about ethical issues and debate matters of faith and belief. Conviction offers an opportunity for a fictionalized take on ethical issues — in this case, questions of loyalty, love, and truth. So you can check off teen appeal here.

In addition to the meaty subject matter and inclusion of complex themes, Gilbert works in powerful emotion and makes Braden relatable; his journey is understandable. His relationship with his father is tragic, not only because it’s fractured but because Braden doesn’t understand how toxic and unsustainable it is. Gilbert’s moving about in the time frame allows for some strong characterization and builds in backstory effectively.

Braden as a character is not always totally trustworthy, and Gilbert uses that to help build suspense, but sometimes the slow pacing of the plot gets in the way. The truth does eventually come out, but as a nod to suspenseful realistic fiction, this read needed a slightly more streamlined plot. The emotional weight of the story and Braden’s relatable journey are strong elements, but may not ultimately be enough to sway the committee to give it a vote this year. –SC Finally a truthful representation of mental illness—what it feels like and what help looks like. (Disclaimer: I’ve only read the beginning of Challenger Deep. I know, I know, I need to remedy that.) A lot of the YA literature published in 2015 presented teens living with mental illnesses from bipolar disorder to anxiety and depression. So many times though, I was disappointed. In The Rest of Us Just Live Here Mikey suffers from OCD and anxiety and his sister Mel has recovered from an eating disorder. Patrick Ness gives readers one of the most honest depictions of people trying to get through each day without the disease taking over; plus they just want to stay alive in a town where a chosen one fights evil.

Ness’ sense of humor is laser accurate when it comes to the tropes of chosen one stories, specifically, the recent YA novels that sometimes have a strong dystopian bent. Checking in with the “A” storyline at the beginning of each chapter was fun, but ultimately disconnected from the actual main story. The characters cross paths occasionally but Ness isn’t commenting on why the “extras” are never the focus of those chosen one books. And although Mikey, Mel, and Jared are fully-realized, the secondary and tertiary characters are generic.

Ultimately, I keep coming back to the emotional heart of this novel. Ness has such a good ear for dialogue (which makes me really excited to see what he’ll do with his upcoming BBC tv show). Mikey’s visit to his therapist in chapter 16 had me texting passages to a friend with lots of exclamation points because Mikey’s fears and his doctor’s responses are emotionally and factually accurate. So although I don’t think we’ll see this one get a Printz, for me, it wins an award for the most memorable scene. —JP 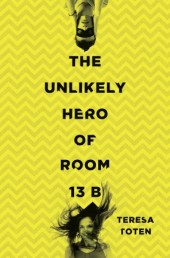 I get it, y’all. This is a great read. I laughed, I cried, and I felt like I had a real window into life with OCD. Unlike Ness’s book, above, here the OCD is central; the teen support group Adam is a part of is a major part of the text, and his growth is explicitly focused on learning to manage his condition. And despite that relatively heavy focus, this is also a funny, feel good book — although neither light or insipid. Is Adam entirely too good to be true? Absolutely. Is his dialogue, especially with Stones, slightly cardboard at times? Also a yes. Are the members of the group insanely endearing and also maybe just a little bit centrally cast, albeit from a particularly good central casting office? Again, yes. Does it make this any less of a great book? Nope.

And in a year with so many mental health books, including some that are inaccurate and maybe even irresponsible, this can stand beside Challenger Deep as one that can be a mirror — a respectful mirror that doesn’t pull punches — or a window — complete with education and factual information gracefully delivered.

Then again, once it stands beside Challenger Deep, it becomes clear which one is the literary heavy weight, and unlikely doesn’t begin to cover the chances this one has given the competition. –KS I couldn’t help thinking of this as a sort of Wall-E prequel, set just a few years before the Buy ‘n Large cruisers take everyone off to space. And while that’s not quite accurate, I kept thinking of that particular vision of our corporate future: bright and cartoony and yet also utterly terrifying. Woolston’s imagined near-future is exactly that.

This is satire through and through, with heart. There’s a lot to enjoy, a lot to make you think, and a few things that don’t entirely work, particularly main character Zoë’s voice. I found myself thinking she was maybe on the spectrum, or had some form of developmental delay, because she’s painfully exacting, careful, and not quite in step with anyone else. There’s something about her eagerness to succeed, the precision of how she thinks about things — it did not read as neurotypical, but there’s no other indication of that, so instead it read as off-kilter and not in ways that made sense. (Other characters are also slightly off kilter, but in ways that are true to their world and experiences — and many of them are brilliant sketches, caricatures with purpose.) It’s possible that this is all down to the drugs that make her compliant, and there is growth and change in her when she stops taking them, but I’m not sure I understand how the treatments worked in that case. And because this is a first person narration, the ways that the voice didn’t quite work diminished the whole, although at the same time I couldn’t put this down and find that I have thought about it since I finished it, something I can’t say for many of the books I read this year.

Blythe Woolston is a consistently interesting, innovative writer. I keep waiting for her breakout book, the one that makes everyone else say yes, this. I don’t think MARTians is quite it, but she’s circling closer and closer, combining a strange world vision, generally strong (sometimes brilliant) writing, and an astounding facility with brevity. –KS