Reality Boy and More Than This and Black Helicopters, oh my!

A few final books we wanted to squeeze in: Reality Boy, which received some buzz early in the year but seems to have fallen off everyone’s radars despite three year-end Best lists; More Than This, a book that has picked up some traction recently as a buzz book and potential contender; and Black Helicopters, which seems strongly divisive but which no one has forgotten despite having first read it months ago — and staying power matters when it comes to awards.

(As a bonus, we each reviewed one of them so you can try to guess which “I” is which blogger!)

A.S. King always delivers an emotional read, with well developed characters, absorbing situations, effective touches of quirky humor, and a thoughtful approach to real life issues. Reality Boy is no exception; Gerald’s family situation is heartbreaking and his emotional journey is finely wrought. He is fighting against so much — against his past, his temper, his reputation, his home life — that his achieving a modicum of peace and balance feels just as epic to the reader as it does to Gerald. King’s ability to show Gerald’s violence and to share some of his brutal fantasies while still maintaining his relatability is impressive. The theme of seeming vs reality, of lived experience vs perceived experience, is played out with almost every character in the book, and on the Faust family as a whole, and resonates strongly today where we can use the online sphere to help shape our meatspace identities.

This is not a perfect book, and the moments of weakness are probably enough to knock it off a list of final five. Gerald’s romance with Hannah is a little too simple and thus seems bland. Their plan to run away is melodramatic (which I suppose makes it true to teenage life), but the joining the circus part feels a bit random — a flaw that seems more obvious because of an abrupt turnaround of an ending. Some of the details in the novel are a tad heavy handed: the cartoony, overly sweet imagery of Gersday; the decision to name the family “Faust”. I think the biggest problem is with Tasha and Mrs Faust; they’re both underdeveloped and unsatisfying characters (it’s especially obvious because the other characters are so nuanced and relatable).

These flaws are not major, but do drag the book down a bit. There’s quite a bit of good here, so I’m glad its hung on and is getting some year end love, but ultimately I don’t see it taking a medal.

I didn’t read this until last week, and then, after a slow start with the first section, I stayed up all night devouring it. This is an unusual, thought-provoking, genre-defying read, and I think it has serious potential — but I can’t say for sure, because this is also a book that demands a second read and I sadly don’t have time to give it that attention before the YMAs.

We discussed this at our local Mock Printz the other day, where it netted an honor. Readership wasn’t at 100%, but even so the conversation was intense and could have gone on far longer than the 20 minutes we’d allotted for each book. Because there’s a lot here. Some of the conversation focused on the questions (foremost among them: will there be a sequel? I can’t find anything out there either way; if anyone knows, please tell the rest of us!). Some of it focused on the philosophical and thematic scope. Some of it was about the specifics of the world building. And some was about Ness’s writing, which is vivid and tight and moved between two very different spaces and tones (the memory scenes and the now scenes) without missing a beat.

I mentioned questions and world-building. I had concerns about the accuracy, if you will, of the American town Seth and his family move to after the incident. Halfmarket just sounds British and not Pacific Northwest; I doubted the likelihood of the pervasive homophobia (total ostracism for Seth) in a Pacific Northwest college town; and I wondered about the perfect boy with the Scandinavian name in that unlikely town — Gudmund is just so obvious as a name/symbol. But then it was raised that we don’t know if any of those things are real or if they are all programmed entities. Is the virtual reality one reality or many realities? Is the narrative imperative of everything happening just as Seth expects it to perhaps true of the life he lived when he was in the coffin, as much or more than it is true once he wakes up? I don’t know, without a reread, what’s actually there, and I am a big believer in sticking to theories that can be supported by the text, but based on my one read these are potentially supported interpretations and they make this a more interesting and complex piece of science fiction than we have seen in some time.

Of course, even if the second read supports the mind-f-ery of what is real and what isn’t, there are issues. Tomasz seemed a bit too pat and perfect and stereotypical, which maybe works if he’s a machine construct (oh, the potential layers of what is real and what isn’t), but is weak if he is real, and if we’re not meant to be sure, then he should be more nuanced. And what is up with the prison? Why are they all below the prison, what broke out through the wall, and why does Seth have so much trouble recalling the prisoner’s name for so long? These all feel like clues to something else, but whatever it is, I don’t think it’s in this text so they become red herrings.

On the other hand, themes of narrative and construction, reality and dream, and what life really offers are all beautifully rendered without ever supplying answers or conclusions, making this open ended and full of uncertainty in all the best ways. And the Driver is just amazing — immensely terrifying and also just doing its job, a dichotomy of existence that embodies so many of the themes of narrative and perspective that Seth grapples with throughout, without ever feeling like a cheap metaphor. Good stuff.

There really is so much here, and it adds up to either a brilliant work or a mess. Right now I’m leaning towards brilliant if imperfect, but the RealCommittee will be making their calls based on more than one read, and whether More Than This offers more than one read’s worth of richness is something they’ll need to determine. I suspect it has a chance, but I’m not ready to put money on it. 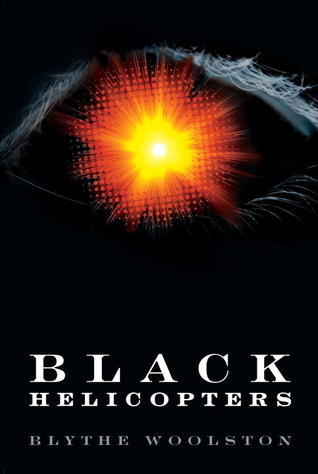 The single most memorable aspect of Blythe Woolston’s novel is its intensity. Reading this book felt like someone put me in an enormous, ever-tightening vise. That she achieves such high tension while jumping around in time to reveal backstory as the plot moves forward is truly a remarkable feat.

Valkyrie’s voice is fully realized in concise sentences, structured plainly with unadorned language. Although the style has been used to connote a common tongue—first person present is ubiquitous among female teen protagonists in extraordinary situations—Valkyrie is endlessly fascinating because she is anything but ordinary. She is brilliant and ignorant, mature but so sheltered that she has an almost childlike way to her, strong and vulnerable. Readers are never asked to pity Valkyrie; her story is told in an almost clinical precision, but this serves to create a realistic document, rather than an obvious piece of fiction.

There is a lot to chew on in Black Helicopters; so much that I regret having only read it once. However, I think even just one read reveals many of the important qualities in the text, particularly the ways in which ideology, anger, loss, and misinformation contribute to violent acts of terror. I was, and continue to be, bothered by the lack of clarity in the aims of the terrorists in the novel. It’s heavily implied that Valkyrie’s mother was not killed by a black helicopter, making the basis for Valkyrie’s distrust and fear invalid. This doesn’t mean that she shouldn’t have believed everything that her world was telling her—how could she not?—but from the reader’s perspective, it muddles the exploration of a terrorist’s motivation. Then again, when Karyn and I discussed these ideas with our local librarians’ book club, no one else seemed concerned with this; in fact, I recall some people feeling that it strengthened the themes.

The more that I think about Black Helicopters, I’m increasingly convinced that it may end up as an honor title on Monday. It has multiple layers of story, an intriguingly complex protagonist, tight sentence-level writing, and an ending that will linger in your subconscious for months.